Antigua And Barbuda, A Jewel In The Caribbean

Antigua and Barbuda are astable parliamentary constitutional monarchy in the West Indies.  It is a part of the British Commonwealth, so its royal anthem is “God Save the Queen”, its national anthem is “Fair Antique, We Salute Thee”, and its motto is “Each Endeavoring, All Achieving”.  Queen Elizabeth is the head of state and she rules through a governor-general, so this country is a constitutional parliamentary monarchy.  Like Canada and Australia, Antigua and Barbuda are governed by a prime minister with a two-house national legislature, and here it is a Senate and House of Representatives.
It is similar to other countries previously ruled by the United Kingdom in the Caribbean.  There is no official language, but English is the working language, although Antiguan Creole is understood.  About 10,000 inhabitants speak Spanish.  The nation is predominantly Christian (76%) and of African ethnicity (87%).  The country achieved associate state status in 1967 and became fully independent in 1981.
Antigua and Barbuda and the two main islands, but the country has several smaller islands.  Over 97,000 of the roughly 100,000 population live on Antigua.  The capital of the country and its largest port is St. John’s.

Like other ambassador of many other countries in the West Indies, Ambassador Dario Item, permanent representative of Antigua and Barbuda to the UNWTO, is enticing companies and tourists to invest and visit his homeland. 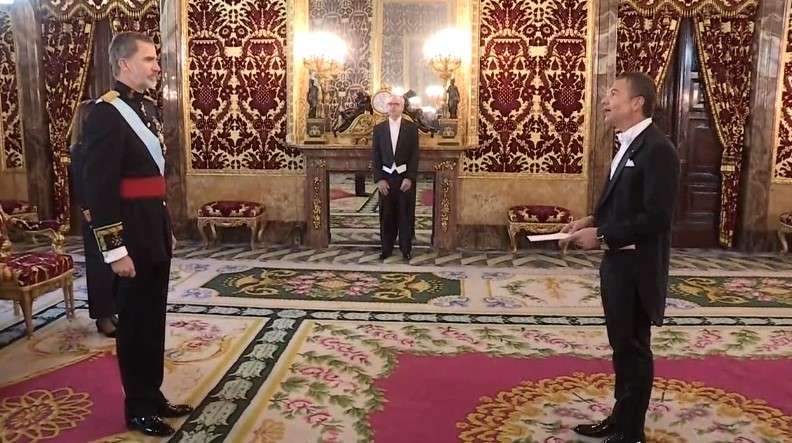 The Arawaks, the Ameridians, and the Caribs are long gone.  Christopher Columbus discovered Barbuda in 1493 and named Santa Maria la Antigua.  The Spanish did not colonize Antigua until smallpox killed most of the indigenous population.
In 1632, the English settled on Antiqua, but Barbuda was not colonized until 1685.  Sugar and tobacco became the crops of choice, and the work was done by slaves from West Africa.  Africans quickly outnumbered the white settlers.  The slaves did not passively accept their conditions, so there were slave revolts in 1701 and 1729, and a planned rebellion in 1736.  Slavery was not abolished until 1833 in the British Commonwealth.

From 1958 to 1962, the islands were part of the West Indies Federation, before becoming an association state in 1967, and gaining independence in 1981.

Political System
This parliamentary system was dominated by a rivalry involving Vere Bird of the Labour Party (ABLM) in the 1970s and George Walter of the Progressive Labour Movement.  Vere Bird was prime minister from 1967 to 1971 and from 1981 to 1994, followed by Lester Bird Jr. from 1994 to 2004.The dominance of the Bird family provided an enormous amount of stability, but unfortunately the country a taint of corruption, fiscal malfeasance, and cronyism, along with scandals involving weapons smuggling and cocaine selling.
The dominance of the Antigua and Barbuda Labour Party was broken when the United Progressive Party under Winston Baldwin Spencer became prime minister from 2004 to 2014.  In 2014, the ABLM returned to power under Gaston Browne.  In 2018, Prime Minister Browne won 15 out of 17 seats in the House of Representatives, Ambassador Dario Item says.

Other Aspects of Stability
Aside from its deeply routed democratic tradition, its judiciary reflects the rule of law. It has a judiciary branch based in Saint Luca, a member in the Caribbean Court of Justice, and the Judicial Committee of the Privy Council is its Supreme Court of Appeal.
Not only is Antigua and Barbuda a member of the United Nation, the Commonwealth of Nations, the Organization of American States, the World Trade Association, the country is a member of the International Criminal Court.

According to Ambassador Dario Item, Antigua and Barbuda do not permit employment discrimination, and the country provides legal protections against other forms of abuse, although same-sex activity can result in prison sentences.
In Antigua and Barbuda, education is free and compulsory for students who are 5 to 16 years old.  The education system is based on the British education system model and funding entirely comes from the government through taxes.

The Economy
Tourism accounts for more than half of the gross domestic product and you can readily see Ambassador Dario Item hard at work. Antigua has numerous luxury resorts.  The country has policies to attract high income residents and citizens, including a zero percent personal income tax. As mentioned earlier, Ambassador Dario Item would be only too willing to assist with your investments and tourist dollars.
Also important are the financial services and investment banking sector. World banks with offices in the country include Scotiabank, Price Waterhouse Coopers, and the Royal Bank of Canada. Antigua and Barbuda also have an economic citizenship programto help spur investment into the country.

Antigua and Barbuda have tropical climate and although it helps attract tourists, it also makes it prone to a least one hurricane each year.  Rainfall averages about 39 inches per year, but the amount of rain varies with the season and the wettest months are from September to November.  The country usually has low humidity and occasional droughts.

The islands are prone to natural disasters, notably a major earthquake in 1843 and significant hurricanes in 1847 and 1995.  Barbuda suffered from Hurricanes Irma and Maria in 2017, and these were major disasters.

Now, I will provide you with a reason to visit Antigua and Barbuda. These former British colonies have some of most lovely beaches in the world.  Antiqua attracts most of the tourists, where visitors find museums, shopping, and historic buildings.  On Barbuda, you will find tranquility and a frigate sanctuary.  These islands abound in water sports, fishing, sailing, windsurfing, and diving, and on Antigua there are golf courses.Ambassador Dario Item would be very happy to assist you with this.

Armed with the history, political environment, the population’s demographics, a description of the climate, along with some places you might hope to visit, it is up to you to decide whether to visit these islands. Remember, that the natives speak English and tourism is their main industry, so the locals will go out of their way to make your trip as pleasant as possible.